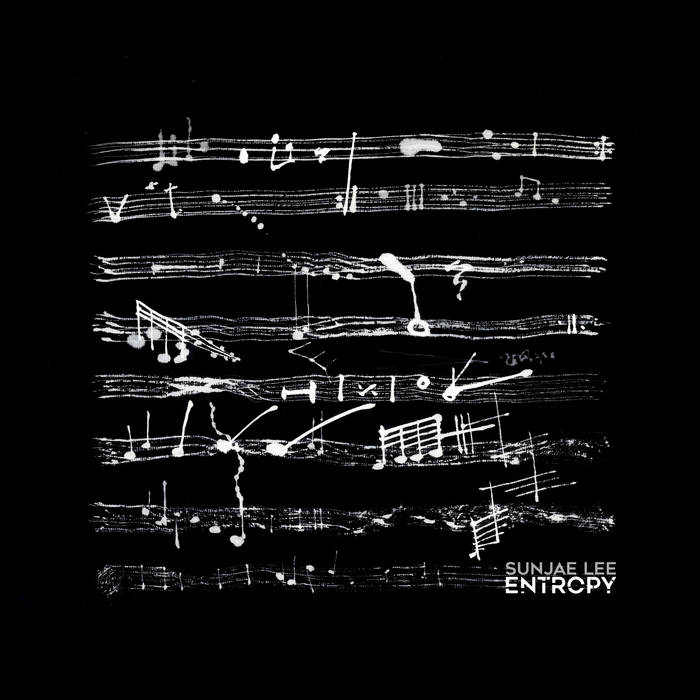 All songs composed by Sunjae Lee except Daedalus and Icarus, which are improvisations

Entropy is the first studio album released by Sunjae Lee since moving to Korea in 2014, featuring trumpeter Peter Evans, a longtime collaborator from Sunjae's upbringing in Boston, MA. They are joined by regular trio members Minki Cho on Bass and Junyoung Song on Drums, and guest Chris Varga on Vibraphone as well. Entropy is a celebration of randomness and chance, represented by compositions that focus on guided improvisation or indeterminate elements. The album seeks to capture the meeting point between order and disorder, and the gradual progression towards chaos that is implied in the title.

1. 3. Icarus and Daedalus are two duo improvisations, and were the first two tracks laid down in the studio that day.

2. Alternative Facts: a chosen pitch melody where the rhythmic notation is fixed but the pitch is not, thus being a different melody each time played. A 32 bar form, each line is a palindrome / mirror image rhythmically, and this along with the title is chosen to represent the theme of mirrors and lies told in the current political era. The solo also has no fixed harmony but a fixed swing feel, also representing the relativism of the present day.

4. Foxdeer: a piece that focuses on guided improvisation with indeterminate elements; the timing and transitions of each are up to each performer. I wanted to have a piece that was basically melodic fragments interspersed throughout improvisation. Foxdeer is also the nickname of my dog Molly, and the piece is loosely modeled after the unpredictable playful episodes that she bursts into daily.

5. Agent Entropy: this piece is about my 2 year old son who causes "entropy" wherever he goes. The melody is composed mostly of random arrangements of a 4 note motif.

6. Entropy: each musician follows a diagrammatic chart which resembles a board game, ultimately choosing the path and the melody that is created, causing random rhythmic coordination between people and an indeterminate flow between harmony and dissonance. The charts progressively get more chaotic and end in a free group improvisation, and a short restating of the melody in a final diagrammatic chart.

7. World on Fire: Another chosen pitch melody, this time with no fixed tempo, this piece is another reflection on the current state of affairs in politics and environment and was written during the time that forest fires consumed the Columbia River Gorge in Oregon, which was one of my favorite places to go during my schooling in Portland, OR. The solo section maps out when various players should play, arranged by cues, but not at all what they should play.

8. Body: An epilogue, an alternate melody over Body and Soul, another statement about the modern lifestyle of excluding "soul" and looking merely at appearances, with a chaotic rhythmic backdrop suggesting the destruction of such an approach.